FOR DAD:THEY CAN'T TAKE THAT AWAY FROM ME 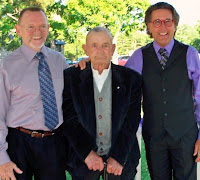 So I am sitting at my computer less than three hours after my father-in-law took the final breath of an almost ninety-four year incarnation. The sadness is still somewhat vague as the full impact of his passing has not yet landed. As I write these words it occurs to me that I get to legally and literally call him my father-in-law as his now lifeless body is in Massachusetts, a state where the lifetime commitment of man to man is recognized as an equally valid marriage. I do not enjoy that privilege in this state and in my community where I reside, pay taxes, and offer civic service. I have little need of lamentation this day about that fact. For I realize in this day of transition and subsequent sadness that those who can and do deny me the equal rights of other Americans cannot take away the familial bond of deep connection with the man who sired the man I am choosing to share my life with. Legislation can never rob me of the beautiful memories I will forever have of our times together in person and on the phone. No one can take away the jovial tone in his voice as he chose to call me son. No one can make love illegal, no matter how hard they try.

My father-in-law was for all appearances a man who would never tolerate the notion of homosexuality or same sex marriage, especially if it applied to someone in his own home or family. It was not religiously, morally, politically, or socially something that he would have included in his sphere. He would have for perhaps most of his life been on the side of constitutional amendments prohibiting the legalization of marriage between man and man or woman with woman. And then, very late in his life, along came the impending marriage of his son to a person of the same gender. A son that had struggled for years with his own issues of internalized homophobia, and bore the added burden of so wanting the acceptance of the Dad he so long ago distanced himself from. As we considered marrying in a different town which would not bring embarrassment to this well known small town man, he not only endorsed our marrying in the family home town, but also announced that he would be attending the wedding! And front and center he was. Out in the very public space of the town commons we said our I do’s in front of the Dad who with open arms and heart lovingly embraced his “sons.” Political ideologies melted away as the family expanded to include the very grateful me.

And now his body is gone from this earth, yet his enigmatic memory goes on. His recent final words of “love you son” still ring in my heart, a song I know I will always be able to hear. And for all of the political debate and controversy over whether or not who I am and whom I love should be legalized or not, they can never take away my memory of the father-in-law I grew to love. Love cannot be legislated, and it cannot be made less by little minds and censored hearts. The power of love moved this man from the far-right to right between the men, and in doing so, he created a space for others to follow. Love is love, and I know he loved me and I certainly know I love him.
And so I say goodbye, and thanks. Thanks for opening to include me and for always calling me son. No, no; they can’t take that away from me.
Posted by RADICAL EXPRESSION at 4:30 PM