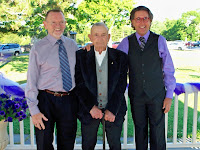 It has been many years since I had a living biological father, and so I must admit to a bit of emptiness as the national observance nears. I do have a truly wonderful step-father. He married my mother after I was already an adult, though, so I suspect the dynamic is different. As I have been going through some dramatic life changes recently, I have found myself pondering what my late father would think of his present moment son. As Dad was vacant via a brain disorder long before he perished, he missed many of the key moments in my life. He never realized I graduated from high school, let alone with honors. He didn’t know of the college scholarships, or the degrees and achievements. He never saw me perform during my entertainment career, or knew of the many places I would travel and explore. He didn’t meet the vast variety of friends I was blessed to traverse this life with, or experience the multiple cities and houses I would come to call home. He didn’t get to champion the career changes, or encourage me during the sometimes difficult transitions. There was indeed a lot that he missed, and I missed having him be a part of it all. There was often a subtle void even during the grandest of experiences. There was a profundity to fathering my father at an early age, and yet the longing to be a son remained for many years into my adulthood.

At the center of these contemplations is a tender and yet persistent quandary as to whether this dad I hardly knew would be proud of the man he’d never know. While he didn’t live to see the accomplishments or the accolades, he also didn’t endure the challenges and the trials, the addictions and the failures. I wince as I ponder what his reaction would have been to those. He was a small town boy who grew up with big time values. He was humble and stalwart, conservative and steady. How would we interact in today’s political climate? What would he have said of my affiliations, and the causes I have devoted myself to? Would this staunch conservative Christian have attended my interfaith ordination, or embraced my current comparatively lofty spiritual beliefs and practices? And perhaps most daunting of all is the question of how he would have handled the most profound of my recent changes: that I left my home state of Florida to travel to Massachusetts where it was legal to marry the man I love? Just two weeks prior to Father’s Day 2010; how would my father have handled that?

I recognize these are questions without answers, and yet they dance through my awareness just the same. I certainly acknowledge the projections of my own consciousness that they represent. I have integrated to a large degree the perfection of how this father-son relationship played out in this incarnation. And yet like gentle whispers the questions return. Would he have still loved me? Could he have understood the depth of love that can exist between two men, and the longing to be treated equally? How would he have reconciled his traditional values and beliefs with those of his seemingly radical son? Would he have shown up at the wedding, and would he have taken my husband as a son? Could we have enjoyed this Father’s Day together, a non-traditional yet loving family? And isn’t that the only value that ultimately matters- the unconditional love of a family structure, regardless of its components?

While my questions regarding my birth father will forever go unanswered, I am once again a son this life time. A man of similar leanings, values, and characteristics did show up at these Massachusetts nuptials. He rose above some of the old moral teachings of his upbringing in order to stand present with his own son on that day. And he called me by a name I thought I’d never hear again. He called me son. He welcomed me into his family as his new son-in-law. As he gathered me to him in a warm and loving embrace, perhaps my own father did give me the answers I so longed to know. While I am now a husband of a husband, I will forever remain his son.


CHECK CALENDAR ON SITE FOR CURRENT OFFERINGS AND SERVICES
Posted by RADICAL EXPRESSION at 9:52 PM

Get Radical Expressions delivered by email!