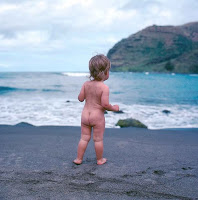 On a recent stroll upon the beach, I happened upon what I surmised to be a family that included a naked little girl that appeared to be having the time of her life. There was something so simple and yet so stunning about the fact that nothing separated her from the sand upon which she played, or the tide that was lapping at her precious little toes. She was the absolute picture of glee, and as I greeted her, she readily grinned back at me, matching me in shameless, open, and innocent eye to heart contact. Her complete unawareness of her nudity gave me permission to simply behold her in all her physical beauty, and in so doing, the greater whole of who she is came shining forth. It truly was as striking a picture of freedom as I have ever seen. It tugged at the child in me that longs to be released from the bondage of all that covers my Innocence, my glee. Though I am hardly a nudist, there is a part of me that envies that level of unabashed exposure; that freedom of physicality reflecting the return to a spirit that needs hide nothing. Whether or not we as adults feel drawn to dropping our clothing in appropriate settings, the metaphor is one that certainly gives me pause.

The absolute lack of self-consciousness in that little girl demonstrated to me the openness and vulnerability that we are as pre-conditioned children. It seemed to me that her smile reflected a being that had yet to be told that who she is isn’t what she should be. She had yet to accumulate enough programming that would have her avert her eyes to someone who met her with a smile. She was so clearly in the experience of that day on the beach, and so not into a story of what should or shouldn’t be, and why she need cover her self from exposure to a bold and scary world. Though I could make a case for the karmic imprinting that had yet to be revealed in effectual circumstance, she was still open and available to the Innocence of her Sourced Self. She could still, though perhaps faintly, hear the angels singing of the sweetness of life. She glowed with the joy of simply being alive. She had no need to hide behind a self-image or an egoic pretence. She was there. She was truly there. And in her there-ness, she welcomed me right in.

I was taught early on that nudity was something that our family simply didn’t do. This teaching applied to physicality and to emotionality. I was taught to hide my feelings in the same way I was to hide my body. I am at a point in my personal emergence where I am blessing and releasing that tribal programming. I want to return to the innate sense of Innocence and defenselessness that my little beach angel was basking in. The pain of hiding and withholding is far too high a price for me to pay. While I may not be hitting the nude beaches of south Florida any time soon, I am committed to forgiving the ways in which I was imprinted to believe I have to cover and disguise the parts of me that were shamed and rejected. I am relentlessly going into the places within that I have avoided for years. I am devoted to feeling down through the layers of energetic veils that shroud my heart and hide my Light. I am being released, through simple intimate Presence, from the depths of self-aversion that has been my hell. I will to experience directly the Sourced beauty of who I am without the story, and then to allow that beauty to inform my earthly experience. I want to stand before the world naked and unashamed. I am risking it all in the name of Love. I am risking it all in the name of freedom. I am risking it all in the name of Innocence.

This is the very heart of forgiveness. This is at the very heart of my journey. Hiding no more in unconscious shame and aversion, I am free to love within the Love. And from that space of free, open Innocence, I give my gifts of Love. I no longer recoil in fear of rejection. I simply give. Here I am readers. Naked, unashamed, and finally free to love.


SEE TAYLOR LIVE CALENDAR ON SITE FOR CURRENT EVENTS AND NAKED AND UNASHAMED WORKSHOP
Posted by RADICAL EXPRESSION at 3:59 PM 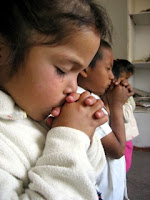 In the most recent studies of the frequency and efficacy of prayer, it was found that an estimated 90% of people world wide state that they believe in and actually engage personally in praying on a regular basis. That is an astounding statistic for many reasons. First, though the form, language, practice, and theology of this act of faith will vary among the many religious and spiritual traditions, as many as 90% of the world’s population are engaged in an active seeking of connection to the Source of their being. Perhaps even more than 90% of the peoples of this world believe that there is a Power greater and a Force transcendent of the appearances of the manifest realm. With all of the myriad differences between the races contained in our humanity, we are at the most spacious level in agreement regarding the Truth that there is indeed an All-Knowing Source of Life that is actively engaged in ongoing creation, and that this Source may be accessed through some form of conscious contact. I may also add that it continues to fascinate me that with 90% of all people believing in the transforming power of prayer, we are still experiencing the world of form in the often tragic way in which we are.
After spending the bulk of my youth heavily ensconced in the traditional Christian prayer techniques of talking to what often amounted to a far-off and disagreeable God out there, my current experiencing of active engagement within the vibrational Source of All that Is leaves me in a state of amazement, appreciation, astonishment, and awe. The before described belief in the power of prayer seems anemic next to the felt-sense Knowingness of the actual experience. Having been blessed with many opportunities to experience prayer with individuals and groups from many of the world’s religions, it seems more apparent than ever that an intellectual belief in the power of prayer does not necessarily result in the actual union that is the deeper promise of this ancient practice. I will only reverence any attempt to connect to Source by whatever lens you choose to explore it. It is often true, however, that there is a deadening in the practice that is most often ladened with words from the mind, and devoid of feeling in the heart. And that, my beloved readers, is the Power inherent in the Presencing practice of prayer.
Prayer may enlist words for the sake of evoking feeling, yet the depth of prayer is in the sensations generated by aligning within the One Source. Prayer is not mental, it is vibrational. When one is vibrating at the frequency of Source, prayer is its own answer. In the vast majority of the praying of the world, great attention is given to what is deemed to be wrong, broken, or missing. Some type of pleading is then engaged, imploring the God of current understanding to fix these supposed problems in such and such a way, and within this time frame. The vibrational content of the prayer is the frequency of the perceived problem. We are inadvertently creating more of what we don’t want; by focusing the power of our attention on what the mind thinks is wrong. Our feeling state is the power behind our ability to consciously co-create. Our feeling state, when plugged into Source, is what brings the manifestation of Divinity into the forms of this realm. Our feeling state IS prayer. When we are heartfully focused within the ever-Present, Already Isness, our inner-state of heaven becomes the reality right here on earth. If even close to 90% of the worlds population would tap into the feeling level of Source, the great awakening would be here and it would be now. It WILL be here, it WILL be now. It is the WILL of the One, and so it must be so.
I am devoting the month of September to saturating myself more than ever in the vibrational frequency of my Source. I am called more and more to the simplicity of Being. For me, the crux of the spiritual journey to now here is the direct relationship of vibrational prayer and experiential forgiveness. That’s it. I align myself within Source, and become a field of PRAYER that FORGIVES the appearances of the world in me. I feel deep within my Soul that it is for this that I came. That is my earthly mission. To deeply love all that is through the felt-sense Knowingness of a prayer that forgives back to One. That is the Presencing Power of Prayer. Feel Source deeply, and SO IT IS.

September 10th is the Unity World Day of Prayer, and I am excited to host an event on 9.9.9 all about the mechanics of prayer, and its practical application. I will end the month facilitating a workshop on Forgiveness. Information on these events is available on the site.


http://www.taylorestevens.com/calendar/index.php
Posted by RADICAL EXPRESSION at 11:42 AM

Get Radical Expressions delivered by email!