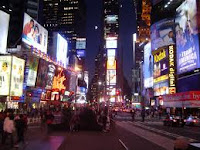 I recently returned from a speaking engagement in New York City, undoubtedly one of my favorite places on the planet. I was blessed to live there for a number of years, and it will always hold a special place in my heart of hearts. Its specialness for me lies not in its culture, attractions, architecture, cuisines, or diversity. It is special to me because it did and does represent an aggregate of possibility unparalleled in this country and perhaps even in the world. There is a buzz that is present there beyond just the roar of transformation forms, construction sites, and closely packed people. For much more than a century, people have come to New York from all over the world and all over this nation in search of the realization of a dream. People have flocked to this cement jungle to live out a freedom they couldn’t seem to demonstrate in the place of their origin. They have in many cases faced their greatest fears for the chance to give their greatest gifts. Countless individuals have risked it all for just the chance of taking a bite of the mighty Big Apple. For sure many hearts have been broken and fantasies shattered in the process. As the popular lyric promises “if I can make it there I’ll make it anywhere…” New York City is a formidable opponent as I came to personally find out. But possibility masquerades itself in many forms and for me the reason I had thought I made the big move to the biggest city was not at all the reason I was called to be there. While it seemed the possibility of a dreamed of career was my instigating attractor it was a whole new way of living that was born in me during my tenure in Gotham. I came to learn that the possibility I felt as I pounded the pavement and pursued my dreams was deep within me and not so much in what appeared to be the lure of this magical city. There is indeed an undeniable collective energy of opportunity and a palpable passion. That energy touched something in me that had begun to be dormant and grossly under-attended. I had gone as far as I could go in the Midwestern city of my birth, and it seemed that my chosen profession was demanding a bigger arena in which to flourish. I came to learn that it wasn’t at all the case. My Soul did have another agenda that could best be fulfilled in this place of profound populous, and it was a possibility that transcended the surface reasons for which I thought I was there. I came to New York to grow up and to grow open.


One of the many things I love about revisiting this magical place is that it is the perfect container for me to check into my current sense of what is possible for me in this Universe of Infinite Possibility. To reiterate, I am clear that possibility lives in me and not so much in a geographic location. And there is a collective consciousness in places like New York that vibrate at the frequency of the concentrated mass. Thousands of people passionately pursuing possibility creates a vortex that can be quite literally felt if we are paying attention to our energy systems. On this recent visit I could feel more acutely the inertia of tribal agreements around aging pressing into my sense of what is still possible for me at this point in my journey. I was a dancer and a performing artist during the bulk of the time I spent in New York. Attending a couple of Broadway musicals brought back the memory of a flexibility and stamina not present in my physicality today. I no longer have the youthful energy to do the literal hours of walking I once did. And yet there remains a sense of renewal and possibility that I courted as I walked the familiar streets and drank in the exuberant energy. It is true that I am doing it a bit more slowly these days. And the collective sense of yes reminded me that what is in effect today does not define what is still possible in my continued emergence. The city reminds me that I have still have dreams to realize, and gifts to give. I am still alive within a field of vibrating, pulsing, unlimited life, and that life is always seeking to live more fully as me. The forms of my expression have changed and altered through out the years. Being back in New York and having the opportunity to lecture in a theatre that is also home to a tremendous and enthusiastic Unity congregation brought me to s deeper realization than ever that I am now clearly doing what I came to this planet to do. I am giving my greatest gifts from the deepest place within me. The possibility of Spirit flows through my open heart and into inspired words that then touch and empowers those who are in attendance and that choose to listen. They are moved to feel the possibility that is vitally alive in them. They are challenged to come more fully into their own highest sense of what is possible individually and collectively, and to confront the programming that may have been holding them back


It was for a whole new and deep spiritual connection and living felt-reality that I was led to the city that never sleeps, and I have never been more centered and relaxed in who I am. New York remains for me a reminder of what is possible and what is worthy of pursuit. The form of that will be perhaps different for all of us, but the journey to the core of our own being is a Universal journey. Traversing the road to fulfilling our dreams and desires is what teaches us who and what we are in practical and useful ways. The sense of possibility that is the very essence of aliveness is an infallible GPS. It is ever active within us and it is for us to awaken to its call. What dream did you perhaps long ago suppress, and what might be possible if you gave it the attention that will fan the flame of its realization? What inner call have you tried to deny, and are you willing to risk the comfort of mediocrity for the aliveness inherent in saying yes to your heart? What is still possible for you in your life, and are you willing to expand your probability to step fully into Sourced possibility?

It’s up to you. The possibility is ever and always in you.

Posted by RADICAL EXPRESSION at 10:15 AM